So, I had to run up north to buy horse feed today.    After finishing at the feed store, I suddenly realized I was close to one of the local card shops.  And, wouldn't you know, that shop has a small show the first Saturday of every month. Why, what an amazing coincidence, today is the first Saturday of the month!  Can you believe it?

But, the weirdness didn't end there.  When I grabbed the grocery list on my way out of the house, I somehow (I don't know how) grabbed my 1971 Topps want list. Can you believe that stream of coincidences?

Yeah, me neither.  My wife was going to a mall up in the same neighborhood and could have gotten the feed, but I volunteered to get it so I could slip over to the show.

So, anyways, I went to the show and was looking around a bit (only 6 or 7 tables) and there was a card table set up in the back of the shop. Come to find out (and this part I truly didn't know about) they were having an autograph signing with Ty Hensley, who was the Yankees Number 1 pick in the 2012 amateur draft.  So, after letting a few little kids in front of me, I paid my money and got an autographed picture. 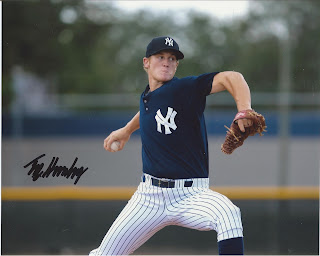 It felt a little weird being a 46 year old man in line to get an autograph from a 19 year old kid. But, I felt a bit better seeing a fellow that was at least 75 also in line.

Ty made 5 appearances in the Gulf Coast League this year, had just gotten back from the Instructional League, and was going to be going soon to the Dominican Winter League. He is unsure where he will end up next season.  Low A Staten Island is possible, although he was hoping to get assigned to High A Charleston (or get promoted there during the season.)

Here is a scouting report on Hensley.

Posted by carlsonjok at 4:16 PM