As long time readers (all 3 of you), I started collecting signed 1963 Fleer cards back in September of 2012  It was a project started without much thought for what I really expected to accomplish.  At the time, there were some cards that seemed out of reach.  If I had really stopped to think logically, I never would have started.  But, I did and as the circumstances of my life evolved, I found myself occasionally being able to acquire cards that I previously though out of reach.

I worked steadily on the set over time, but my efforts came to a halt nearly three years ago, in the spring of  2018 when I received back the Vada Pinson card from authentication.  I've done my best to keep my eye out for any of the remaining three (two really, since Clemente will be out of reach.)

Roll the clock forward to a couple of months ago, when a lot of 47 signed '63 Fleers came up for sale on eBay. One of the cards was of Dick "Turk" Farrell, who I still needed.  Farrell is a tough get since he passed away in 1977, at the age of 43 and only 8 years after his baseball career ended.  I dropped the seller a note expressing my interest in that card. Not surprisingly, he wanted to keep the group complete since the Farrell is one of the key cards in the set.  I told him that I understood and if he ever changed his mind to let me know.

Fast forward to New Years weekend when I get an message from him, saying he is ready to break the lot apart.  We quickly agreed on the price and here it is: 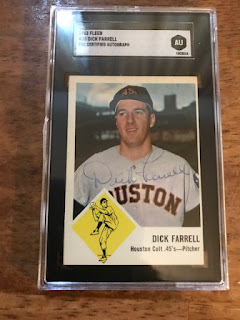 The 64th signed 1963 Fleer card in my collection.  The only one's remaining:  Ken Boyer and Roberto Clemente.  Both  are similar to Farrell in that they all died young. Clemente's story is well known, of course.  Boyer passed away in 1982 at the age of 51.   I have seen at least one copy of the Boyer card, and a couple of forgeries.  I have actually seen one Clemente also but, if memory serves, the asking price was over $5,000.  Even if I could afford that, I couldn't ever justify that kind of expense.  So, in the end, 65 out of 66 will be complete for me.
What I am listening to: I'll See You in My Dreams by Bruce Springsteen
Posted by carlsonjok at 5:49 AM