My last post was about the 64th unique signed 1963 Fleer card in my collection.  I told the story about how I came to possess it, But, that was not the whole story.  I couldn't share the rest of the story at the time. Now, I can.

The seller of that signed Dick Farrell card is a big autograph collector.  Though I didn't know it at the time, he and I have a mutual trading acquaintance.  When he contacted me, he also pointed me to a card for sale at Clean Sweep Auctions: a signed 1963 Fleer Ken Boyer which I still needed. Because it was a raw card, I sent the listing to PSA for a quick opinion on it's authenticity.  And and it came back as "Likely Genuine."  So, as soon as I got the ruling, I went and bought it.

It shipped on the same day as the Farrell. But, unlike the Farrell which arrived 4 days later, Boyer went missing. From January 4, for two and a half weeks, he was no where to be found. I know the problems that the Postal Service has been having, so I remained patient.  Well, mostly patient. I still checked the tracking a few times a day to see Ken popped up again.  Yesterday, he finally did; showing up at the Oklahoma City Distribution Center.  And today, he arrived in my mailbox. 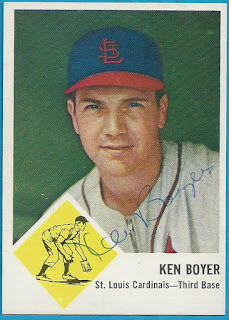 The 65th and final signed 1963 Fleer card in my collection.  Oh, I'll still keep an eye on the market.  I don't expect to see, no less buy, a signed Clemente.  But, it is fun to dream and I may be able to cheaply upgrade some of my rougher pieces.

What I am listening to:  Vin Scully calling Hank Aaron's 715th home run.