The next of my horse themed tobacco card pickups is the 1939 (issued) Will's Cigarette's 40 card series of the top racehorses and jockeys of 1938. I was able to get the entire 40 card set for about $15 delivered.  If there are any horse racing history fans out there in my "vast" readership, please note that the set was issued in the United Kingdom, and is focused there, so there is no Seabiscuit or War Admiral cards. 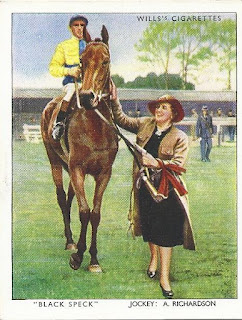 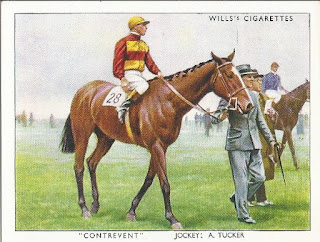 The WD &HO Wills company was founded in 1786 under a different name, and was the first British tobacco company to mass produce cigarettes and was also one of the first such companies to offer trading cards with their products. In 1901, Wills along with 13 other British tobacco companies merged into the Imperial Tobacco Company, including the  previously covered John Player & Sons.  They offered their first trad card in 1887, but didn't begin offering general interest sets until 1895. 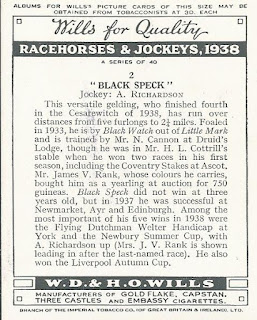 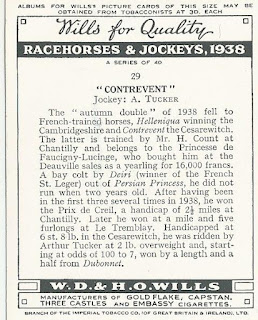 The cards themselves are a hair narrower than your modern sports card and about 3/8" shorter, so they still fit well into a 9 pocket page.  The artwork is fantastic. I find that it is quite realistic in how it captures the moods and mannerisms of horse and rider.  As I was researching this post, I have seen the same artwork offered in print form, though generally listed as Artist Unknown.  I don't know if this means the tobacco company commissioned the work to be done or licensed existing artwork. What is interesting to me is that the first 27 cards are vertical, while the last 13 are horizontal. I don't know if this indicates that the cards were issued in series, but it is a curious thing. More research will be needed.

With regard to the subjects, there are (obviously) 40 different horses, but 21 different jockeys including Pat Beasley who appeared 6 different times.  In case you were wondering, I did not attempt to trace the lineage of any of our horses to the subjects in this set.  While I know people who are fascinated by bloodlines, I found the research tedious and of little more than passing interest.

Up next will be an Australian issue from 1906.

What I am listening to: South Central Rain by R.E.M.

Posted by carlsonjok at 5:36 AM