It's hard to believe it has been so long since my last post. Indeed, it is hard to believe it has been nearly 3 months since I got back from vacation.  My wife and I took our 3rd annual pilgrimage back to Ohio.  Our vacation always starts with a weekend trip to Cedar Point, the Roller Coaster Capital of the World, which opens for weekends from mid-September through the end of October for Halloweekends.  We stay in the old section of the Hotel Breakers and spend Friday night, and all weekend, riding roller coasters, going through haunted houses, and eating fair food.

After that, we visit family. My wife was born and raised in Ohio. I am originally from Rochester, NY but moved away after college. My sister and brother-in-law moved to Cleveland over 20 years ago for his work.  About 10 years ago, after my grandmother passed, my parents moved to Cleveland to be closer to my sister and the grandchildren.  Cleveland may not excite you, but it is actually a fun town. I am going to try and go back this summer for the National Sports Collectors Convention.

Hobby-wise, life has been quiet. Until this week, I've not done anything since I got back from vacation. I did get a nice Christmas present for my Fleer autograph project and I am excited to share it.  But, I need to play catch up first.  So, I am going to try and knock a few posts off this week. Wish me luck! 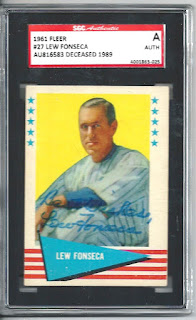 This Lew Fonseca was the ninth autographed 1961 Fleer card I have acquired. Fonseca was born in 1899 and died in 1989 at the age of 90. With the exception of one outstanding year, he was mainly a slightly-above-replacement level player. His major league career spanned 12 seasons between 1921 and 1933, playing for Cincinnati, Philadelphia, Cleveland, and the Chicago White Sox. The last two years, he was the player/manager for the hapless White Sox. His best year was 1929, when he won the AL batting title with a .369/.427/.532 slash line.  His high slugging average was not due to any inherent power as he only jacked 6 home runs that season. His SLG benefited from counting 44 doubles and 15 triples amongst his 209 base hits.

Fonseca's main claim to fame is to be a pioneer in using game film to study opponents. He also editted, directed. and occasionally narrated World Series highlight films from 1943 to 1969.

What I am listening to: Washington Square by Chris Isaak

Posted by carlsonjok at 7:00 AM