So, on my previous post, I had a number of goals for this year, one of which was to add one more card to my 1963 Fleer autographed set.  With only 7 cards remaining in that quest, two of which are out of my reach (Mays and Clemente), I rated that as the goal I was least likely to achieve. I have started to broaden my searches for that by looking at auction houses, but I still rate it as my most challenging goal. 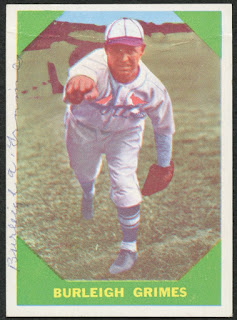 I've already completed 1960 and am 4 cards away from completing 1961 as unautographed sets. But, while I like set building, I like challenges, too. The autographed 1963 Fleer set was a challenge. And hella fun. So, I thought I'd give this a try. There are probably plenty of cards that I can't get, like Babe Ruth, where the player died before these cards were issued.  And probably plenty that may be too expensive, but this is one of those challenges where it is the journey and not the destination.

Well, that is it.  I need to head out to get stalls ready for the cold weather tonight and feed the horses. I have tickets for tonight's OKC Thunder-Denver Nuggets game.  My employer is a sponsor of the Thunder and I was able to score a couple tickets that are usually reserved for the marketing folks to use to schmooze customers.  Row B in the level closest to the floor.  Normally,  the nose bleed seats (300 level) is what I can afford. I will generally splurge once a year on 200 level seats. So, I am excited beyond belief!  Ta!

What I am listening to:  Away by Rorey Carroll.