And, so that is it. My card show haul.  I had been there about 2 hours when I got a text from my wife asking "Are you still at the show?"  That was my cue to leave and, since I was done anyways, I headed home.

So, here is the closing bookend: 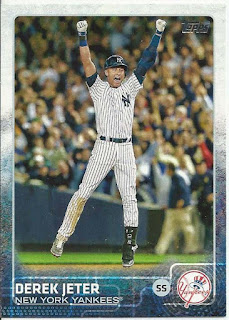 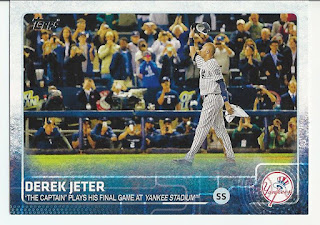 The first is, as I understand it, is from Jeter's third to last game on September 25, 2014.  It captures the image of Jeter after he hit a walk-off RBI single in the bottom of the ninth against Baltimore.  The second image is, I believe, from his final game three days later when he hit an RBI single in the top of the third inning and was promptly pinch run for by Brian McCann. That is the image of Jeter walking off the field for the final time in his playing career.

What I am listening to: You Got to Me by James McMurtry

Posted by carlsonjok at 5:00 PM