It has been about three months since I have blogged about my first hobby love, the 2004 Fleer Greats of the Game. I've picked up a few cards here and there, but haven't blogged about because I have been fairly busy with that part of life that takes place between card shows.  However, I recently won a couple of EBay auctions for some '04 GOTG for some unbelievably cheap bids. I managed to snag three more insert cards I needed towards completion. 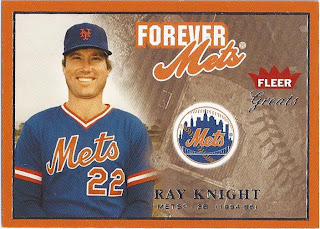 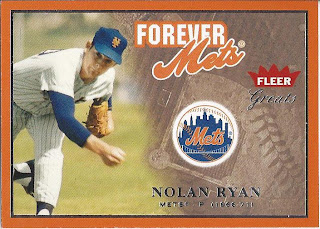 With these two cards, I am down to needing nine more cards from the 29 card Forever insert set 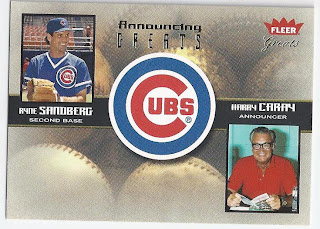 The last time I posted about this set, I didn't have any of the 10 cards in the Announcing Greats insert set.  With this Sandberg/Caray card, I am actually down to needing only one to complete the subset.

But, wait! That's not all!  The same seller I bought the inserts from also had a small lot of 6 Blue bordered parallels, 5 of which I didn't have.  Here's two: 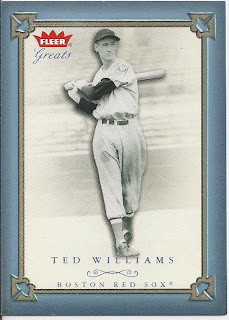 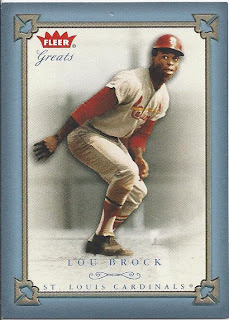 I am still torn about putting the blue parallel set together.  But, I couldn't pass up the opportunity to get these for about 50 cents each.  I now have 35 of the 80 blue parallels of the first series (which are numbered to 500), but I only have 1 of the 65 card second series blue parallels (which are numbered to 75.)  I could might be able to make a decent run at the first series, but cards from that second series are as rare as hen's tooth and I consider it unlikely I could ever complete that.  So, I guess I'll just keep on as I have:  look for cheap multiple card lots of these parallels, but to not make it any kind of priority.
Posted by carlsonjok at 5:33 PM