Every Dog Has His Day - Ed Brinkman


Though I am skeptical of my ability to sustain any regular feature here, given my "real life" obligations, I need give it a try.  I've basically slipped into a mode where any posts are half-assed and, consequently, I have limited readership.  Not that I am looking to challenge for the Blog of the Year or anything, but I feel like I've taken more from the community than I have given and need to work on what I contribute.

So, here is how it is going to work. I will periodically grab a random card from my collection and find the best single game performance in that player's career, as measured by Baseball Reference's Win Probability Added statistic. 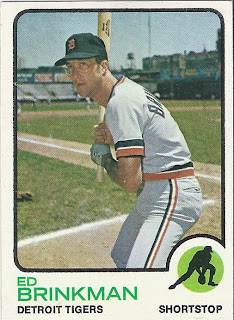 This card is from the very first sheet of my 1973 set.  I won't be proceeding through this linearly, in case you are wondering. I mainly chose this card because Ed is striking the pose of a particularly ineffective hitter, what with choking up and crouching in that odd way. And, indeed Brinkman had a .228/.280/.300 slash line over a 15 year career.  He was mainly known as a good glove man.  Over his career, he notched up a dWAR of 20.3 versus an oWAR of 5.3 and managed the mind boggling feat of three seasons with dWARs higher than 3.0

Ed's career day was May 23, 1970 when his then team, the Washington Senators, squared off against the Tigers in Detroit.  Overall, Ed went 4 for 5 with 1 run scored and 3 RBIs in a 6-5 Washington victory.  His contributions were as follows:

I enjoyed researching this post, although I struggled with writing it.  Hopefully, I'll find my voice if I keep at this.

Coming up next: an unexpected addition to a PC.

What I am listening to: Baby Please Don't Go by Lightnin Hopkins

Posted by carlsonjok at 7:22 PM

Email ThisBlogThis!Share to TwitterShare to FacebookShare to Pinterest
Labels: 1973 Topps, Every Dog Has His Day