As mentioned earlier, I won $50 in a contest at Net54baseball and decided to buy a box with it. I ended up settling on a box of 2010 Tristar OBAK. It is a quirky little set that seemed to appeal to me.

The box contains 20 packs with 6 cards each, 5 modern sized cards and 1 T212 mini. T212 is the designation of the original OBAK tobacco cards. The 120 card modern size base set is made up of a number of mini-series:

I'll keep track and see how I did in the end. But, let's start out with the cabinet card. 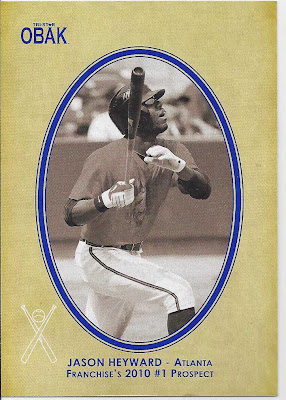 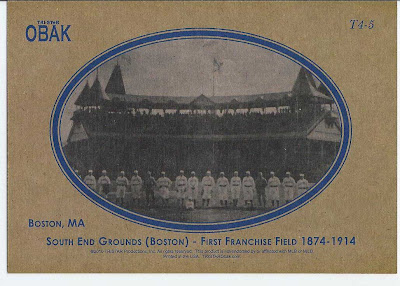 At one per box, I am guessing I'll never complete the whole 30 card series although I will keep an eye out for them. As you can see it is a pretty sharp card. With J-Hey on the front, and the first playing field used by Atlanta's predecessor team, the Boston Braves/Doves/Beaneaters/Red Stockings. My only complaint with this is that, despite being advertised as serial numbered, this card is not. A minor complaint to be sure. So, over the next few days, I'll be reviewing the packs in groups of 4. Stay tuned.
Posted by carlsonjok at 8:00 AM