I went to my local card shop yesterday to continue on my quest to finish the 1978 Topps set. I had a fairly good day, picking up around 35 cards, to get me up to 720 out of 726 for the set. The shop had at least 3 of the other 6, but I am down to the money cards, like the Nolan Ryan and the Eddie Murray rookie card. Since my rule is that my purchases are cash only (no plastic) and no more than $100 a month*, I decided to defer going after those other cards until later. As I was checking out, I noticed a 2010 Topps Heritage box that promised that some packs contained relic cards or autographs. So, I took a chance with $3.99 (plus tax) and picked one up.

Here is what I got: 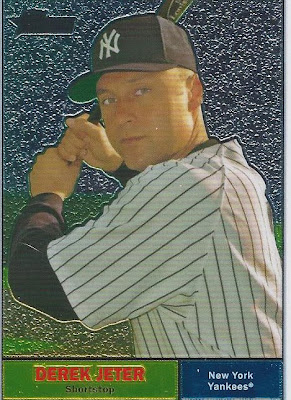 A Derek Jeter Chrome (1861 of 1961). I signed up for Beckett, but they apparently don't want my money, since trying to sign up for their online price guide gets me 404ed. Best I can guess from various other sources, it books at around $12. So, it went from pack to scanner to toploader. And tonight onto EBay. At the very least, I have probably paid for the pack I bought. Hopefully, I'll clear enough to go and buy a few more.

* I have a few non-card related items up on Ebay. Anything I clear from them will go to COMC to add to my Paul Blair collection.
Posted by carlsonjok at 7:47 AM