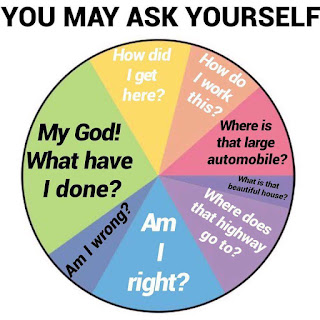 Collecting trading cards would seem to be a simple, easy to understand hobby.  When I first got into it, back in late 2010, with my Paul Blair player collection, I certainly would have thought so. I did not know of such things as relic cards, sticker autos, short prints and serialized cards. I was quite the naïf.  In the near decade since, my collecting has taken me in multiple directions: set building, set building for sports I don't even follow, autographed cards, even non-sport tobacco cards.

But, still at the center is that Paul Blair player collection.  It has been somewhat stagnant these last few years, but occasionally something gets added.  In my COVID19 quarantine, I have spent more time at Net54Baseball and came across a long thread of Orioles and Brooks Robinson collectors and caught a glimpse of some Blair memorabilia. I introduced myself and one thing led to another and a trade deal was closed.   In exchange for one of my 1993 Nabisco Blair cards, I got a handful of team issued Paul Blair postcards (which are still in transit) and this: 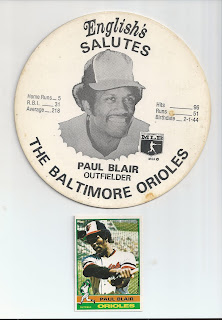 I didn't get the 1976 Topps card in the trade, I only included it here to give a sense of the size of the item above it.    What is it, you are probably asking?  It is a 1976 English's Chicken lid.  You are probably wondering if that is really a lid to a bucket of chicken?  If you are, you would be correct.

My God! What have I done?

If you had told me in 2010 that I would have added a lid to a cardboard bucket of fried chicken to my collection I would have thought you were crazy. But, here we are.  I have a 44 year old chicken bucket lid and I am excited beyond belief.  I have occasionally searched for one of these; always unsuccessfully.  To have it fall into my lap like this is a nice bit of serendipity.  I thought I might explain about English's, but I found out that the late, great, Bob Lemke had beat me to the punch. You can read his blog post here.  And the collector he got his information from?  The same person I traded with!  Small world.

Hopefully, the post cards will be here by the weekend, so I can show them off.

What I am listening to: A Tout Le Monde by Megadeth (yes, I probably should have posted "Once in a Lifetime," but I am in the middle of a thrash metal phase, so you get this.

Posted by carlsonjok at 8:45 PM