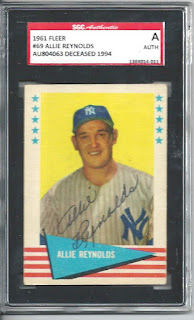 He retired after the 1954, in which we was still effective turning in a 13-4 record with a 3.32 ERA and a better than league average ERA+ of 105.  After his playing career, he was active in the oil and gas business in Oklahoma, becoming the owner and President of the Atlas Mud Company which appears to be still extant 23 years after his death from complications of lymphoma and diabetes.
Posted by carlsonjok at 11:15 AM