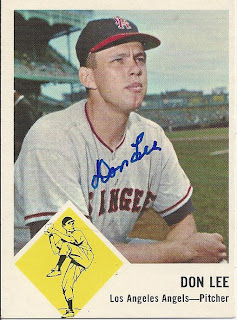 This project has pretty much ground to a halt.  I have been keeping an eye out for more signing opportunities, but I haven't seen any since the signing this card was sent to.  Even Sandy Koufax hasn't seemed to have his annual private signing.  Ah well, it is still pretty cool having nearly 40% of the cards signed.
Posted by carlsonjok at 2:26 PM