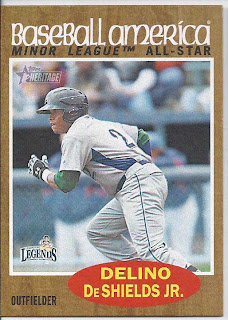 Delino is the son of the former major leaguer of the same name.  From looking at his minor league stats, it looks like he is following in his Pops footprints to be a fair hitting infielder with some speed on the basepaths.  He is only 19 and is currently at A-Ball Lexington in the Astros chain.  With any luck, I'll be seeing him in OKC in a few years. 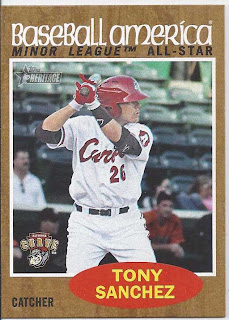 Sanchez is a catcher in the Pirates system.  So far he appears to be an okay hitter with good on-base skills, but little power.  He just got promoted to AAA Indianapolis. 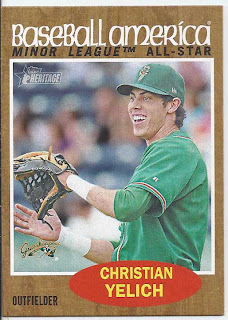 Yelich is a power hitting outfielder in the Marlins system. He absolutely raked last year at Greensboro with a .312/.388/.484 slash line and 15 taters.  He is at high A Jupiter this year.

These are most welcome, bringing me down to only needing 26 more cards to finish the Minor League set (all SP.)   With 19 cards to go on the MLB Heritage set for 2011 (16 SP and 3 inserts), I am getting nearer to the finish line of completing this set.  I think I'd like to knock it off before the end of the year. 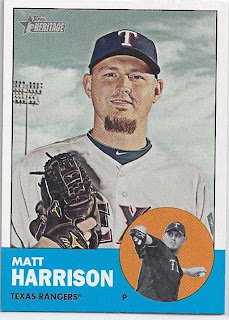 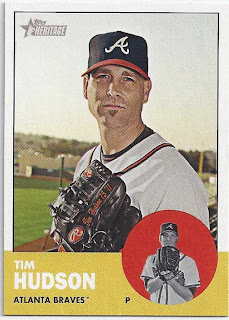 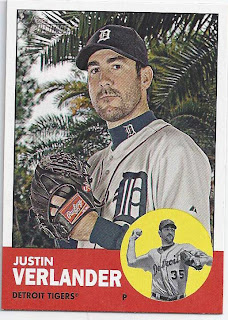 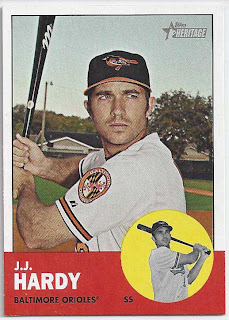 The four 2012 Heritage cards I received are all for good players and took a good chunk out of the non-SP base cards I still need.  Hopefully, I'll continue to make progress on this set during the year, although I don't expect to complete it.  My focus in on vintage and, while I really like Heritage, it does get treated like a red headed stepchild in my collecting.

Anyways, thank you Charlie!
Posted by carlsonjok at 7:30 AM